A downloadable game for Windows

Update: this game has ceased updating! Completing this game at the moment is simply too much for my already slim work/life balance. Thank you so much for the support - it means a lot to me.

After over a year of work and kind support from my Patreons, the demo for my game, Sightless, is here! This game is an exploration based game with RPG-like elements, and stars Sena, a curious boy who yearns to learn more about the world he lives in. To download, simply click on the link offered above!

Thank you very much to everyone who has supported this game from the beginning! If you enjoyed this demo, consider buying me a Coffee.

Included in this demo are:
*the game itself
*RPGmaker's RTP files

Once the file is unzipped*, make sure to install rpgmaker's RTP files first; details on troubleshooting these files can be found in the read_me.txt. Once they are properly working, run the game.exe file and you're ready to go!

*Note: Due to LZMA compression's incompatibility, this file now uses deflate compression for the zip! If the  download still doesn't work, download 7-ZIP ( http://www.7-zip.org/ ) and extract using this program!

ok ok ok i heckin love this but your patreon doesnt seem to exist and the only info is the devlog and that's a bit... abandoned...

should i bother getting my hopes up for what would be an amazing game, or is this dead?

Between my job and other commitments, this game isn't something I'd get your hopes on me completing. It was a lot of fun to make - and it's really sweet getting comments from folks! - but if I were to ever pick it up again, I'd need to make sure I'm in a better job position first.

Thank you again for playing it - and sorry for the letdown!

i get an error message when i Try to start it up "RGSS-RTP standard not found" . Would really love a fix if possible. i really want to play ur game

ok never mind i read the read me. sorry >//< it works now

Heya! Is this project still seeing progress? It looks promising. :)

Hello, sorry for the delayed response!
The short hand is yes, though my updates happen at my patreon (rubindraws) rather than here. I'm hoping to give a post about it on here and on my dev blog in soon though! (ideally in the next few months, but definitely aiming sometime this year)

(longer hand of this is that I had to take a hefty break (~2018 to mid 2020) due to being in a very dangerous irl situation for bit, so I couldn't afford the time to work on the game. Now that I'm in a safer and stable household I've started up my work again ^o^ )

Daaang. :o I'm glad to know you doin better and that things are resolved. Looking forward to what you have in store!

I enjoyed this one ^^ I especially liked the approach to magic, and how certain things weren't what they appeared to be. I did find a minor bug, but only during the second time around. It happens in the school hall, and involves a certain little bird.

In any case, I covered the game for my channels. I hope you don't mind, and hope it helps!

Hello! Thank you so much for enjoying the demo (and for covering the game on your channel: I'll see to watching it properly sometime!)

As for the bug, was it a situation where the bird appears again after seeing them the first time? If it is, then I know exactly how to fix it! I've been trying to nab at them as I update this demo, but in the event that I've missed any others: waiting for an event to finish allows it not to repeat. I'll look again to see if I missed any others though, so thank you for the pointer!

No problem, on either count ^^

And that was the one! I also noticed that I could move just before some scripted events start (i.e., in the school when your classmate's trying to get a favor from you. I walked into her just before she started talking, as the screen was fading in).

Thank you for alerting me on those! I fixed the other one as well, hopefully I got all the bugs tackled for this update!!! oqo)c

I really got interested on this game by looking to the art you did (the one of the title), suddenly  more related stuff  high my attention level (the images of Jello and the protagonist, the monster..) And so, I did downloaded the game and play to see what this game for now had to offer.

Even tho I saw some stuff that need to polish a little bit more, the plot and how it was developed to us, let the player with a thirtst....A thirst to seek more about the characters,  a seek to see how does this characters evolve through following and possible situations, about  the past of the world where Sena lives, about why this monster seeks for revenge with him if he was defeated by someone else.

A mistery which involves a witch, a world  on the sky with a dragon giving his energy to mantain it on float, and magic used to protect each other, a pacific place which can became violent in any moment if the people aren't prepare.

As I could say...Nokocchi..youre going on a good path about what I think when I refer to a developer. Plot which make us seek more about the game, which make us want to keep playing and discover. Charming characters.Nice art-style.

PD: Sorry if I didn't read the summary you put on this page. Will not happen again

PD: Probably doesn't matter but at the morning decided to upload my 'gameplay' about the demo. Here they are:

Hello!!!!! Thank lots and lots for your review of this game. I'll take a look at the gameplay you've posted sometime, thank you for posting them to me as well. I wish you the best of luck on your endeavors too, ok? Developing content is a lot of work and dedication, but I root for you and believe in you!

Thanks for those kind works, sadly vidme is down so probably the gampeplay I made got lost. Anyway, im hoping your plans and works are going fine. Keep going, never give up, follow your ideals. How's the  game going so far?

This is pretty good so far, although I do think it'd be nice if the walk speed was a bit higher and the text scroller quicker; as it stands, it feels a little slow to play.

Hi, thanks for the feedback! I'll have to look a bit harder for the latter (the text speed is at it's highest, actually!) but I'll adjust the walk speed for the 1.2 Demo update!

Hey, I tried the game out! I'm actually quite surprised by the custom tilesets and mapping. It's very nice and I'm impressed with it so far. I'm very fond of the sprites as well as I know that they take a lot of work - at least, they do for me. The teachers just look really cool. My only quarrel at this point is that the introduction about the witch went by rather fast, which made it difficult to read aloud. Also, the inability to walk on the grass in the house map was just rather odd. I'm just assuming it's a tileset problem, but it may be intentional. Anyway, good job. I'm looking forward to playing more of this.

Hello!!!! Thank you very much for trying out my game, and for the comments as well! >o<)c !

I noticed how the grass was being in the video. It's supposed to intentionally be unable to be walked on, so that's not good if you could. I'll update this sometime, along with the intro -- I didn't realize how fast it was going until I saw how often it moved on before you were done speaking! Thank you again for letting me see this, and for all the kind words!

P.S: There's a upcoming section that mighhhht have some flowers to look at~

Hi, when I try to extract the zip file I get the error "unsupported compression method" on most of the files in the archive. Here's the full error log: https://paste.ee/p/eb09x

Hi there! Looking this over, my guess would be that it's something from 7-zip's end? The game was compressed using LZMA method, so if your current extractor doesn't support it, then downloading 7-zip and using that should solve the problem: http://www.7-zip.org/

If it still persists, let me know, and I can see if I can work something out!

Ah ok, apparently my archiver only supports LZMA2 for some reason. Very odd. Thanks for the help! 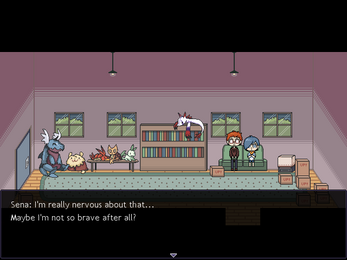 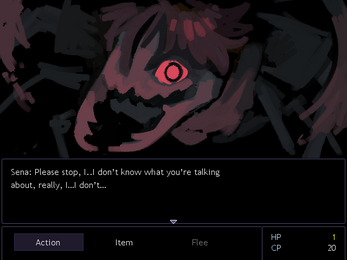 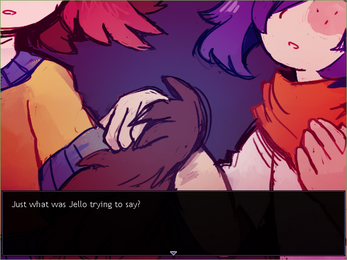